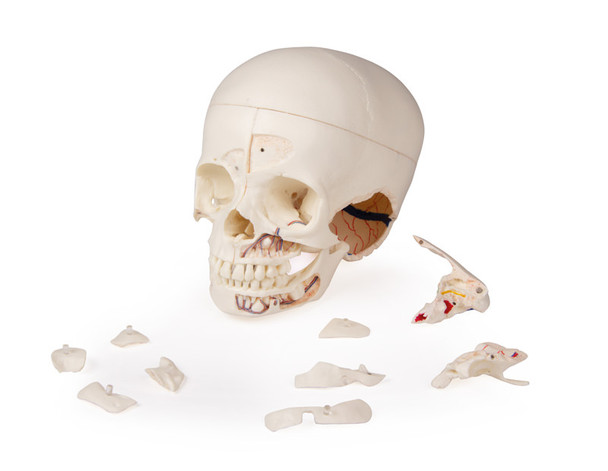 This skull model is a cast of a human child's skull specimen and shows all anatomical structures in detail. It was developed for students of anatomy, medicine, surgery, ENT medicine, ophthalmology, and dentistry. The skull is complexly cut and joined together with metal and magnetic connections.

The top of the skull is open and removable. Bony impressions of the sinus sagittalis, the sinus transversus, and the sinus sigmoideus as well as the meninges are painted. The base of the skull is cut sagittally in such a way that the cut runs through a sieve plate on one side and another cut with the same plane through the other sieve plate of the ethmoid bone, which leaves the Christa galli and the perpendicular plate as well as the entire nasal septum intact. The structures of the anterior, middle, and posterior fossa are easily accessible. One can see the nasal cavity, the turbinate, the septum and the bony and nasopharynx directly. The nasal septum can be removed from the surrounding bone structures. The removable temporal bone shows a complete external auditory canal.

The upper jaw and the lower jaw show the structures of the teeth, the roots, the bony edge of the alveolar process as well as dental nerves and vessels. The maxillary sinus can be opened by removing a flap. The teeth, including the permanent teeth still embedded in the bone, can be made accessible by removing a bone flap.
Estimated age: 3 years

Retail Price
Today's Price Sale Price $850.00
Normal Price
If you are searching for details only a real bone skull could match, this is where your search ends! Experts agree: This is one of the most detailed and accurate plastic human skulls available on the...

Retail Price $471.00
Today's Price Sale Price $389.00
Normal Price
The Adult Human Skull Anatomy Model is an anatomy model from 3B Scientific and manufactured in Germany. The human skull consists of many individual bones that gradually grow together as the...

Retail Price $1,404.00
Today's Price Sale Price $1,149.00
Normal Price
A wonderful addition to a dental office or school, this unique replica of the human skull is exceptionally constructed and detailed. The calvarium is removable and the base of skull is mid-sagitally...

Retail Price
Today's Price Sale Price $68.95
Normal Price
By Jon W. Hisgen.An excellent visualization of how the appearance of the lungs changes due to smoking. The Sponge Lungs are used to demonstrate how the smoking of one, four, or fifteen cigarettes...

Retail Price $539.00
Today's Price Sale Price $443.00
Normal Price
The Lifting Demonstration Figure Model is a model from 3B Scientific and manufactured in Germany. Provide your clients with a graphic demonstration of the effects of correct and incorrect lifting...

Retail Price
Today's Price Sale Price $589.57
Normal Price
In addition to the detailed reproduction of the skull structures, this first-class model of a human skull focuses specifically on teeth and jaws and is therefore the perfect teaching and...

Retail Price
Today's Price Sale Price $1,236.95
Normal Price
Expose your students to the unique physical and emotional complexities of caring for bariatric patients. By wearing the SimObesityShirt, students can develop appreciation and empathy for the...