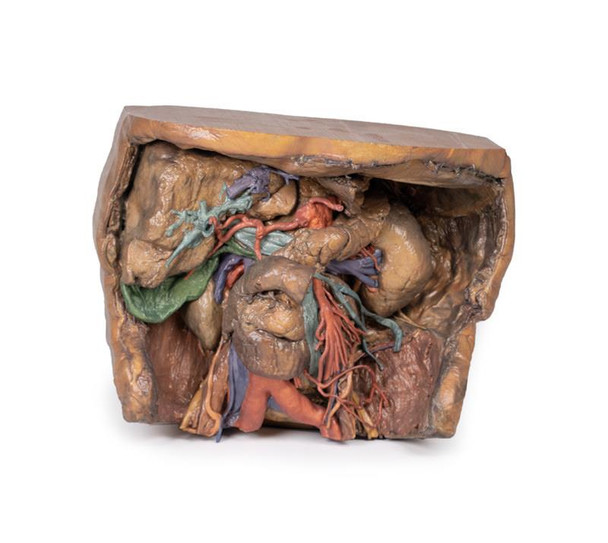 While both have key branches, this specimen does not preserve them in their entirety. The Superior mesenteric artery can be seen in the model exiting below the pancreas, dividing out into many branches and the Inferior mesenteric artery can be observed descending on the left of the abdominal aorta. The left colic artery, moving laterally, can be seen leaving the IMA to give rise to the marginal arteries that supply to the colon.

Venous System of the Abdomen

In the specimen, the left anatomical lobe of the liver has been removed, exposing portal vein branches. These will supply nutrients from the gastrointestinal system to the hepatocytes which will then connect back to the venous system through the hepatic veins. This will then meet the Inferior Vena Cava.

Hilum of the Kidney

The right kidney shows typical anatomy, as opposed to the left kidney which shows anatomical variation. Seen at the right kidney are the Right renal vein, most superior, merging directly into the IVC, the Right renal artery, most inferior, passing deep to the IVC from its origin from the abdominal aorta and the Right ureter, coursing superficial to the right renal artery to eventually travel inferiorly. The left kidney presents unique variation at the hilum with key structures as follows. The Left renal vein, most inferior (as opposed to the usual superior) and is highly subdivided. The Left renal artery, most superior (as opposed to the usual inferior) and the Left ureter, can be seen descending from the hilum and medial to the kidney.

Muscles, Nerves and Other Vasculature

The psoas major and iliacus muscle can be seen on both sides of the specimen and surrounding them, key branches of the lumbar plexus can be seen, particularly on the left side. The Iliohypogastric nerve, continuing laterally as the most superior of the nerves present and the Ilioinguinal nerve, inferior to the iliohypogastric, directed towards the inguinal canal. The Femoral nerve, originating deep to and entering view lateral to psoas major and the Genitofemoral nerve, coursing superficial to psoas major, dividing into the genital and femoral branches of innervation.

Axis Scientific Half Head with Muscles, Nerves and Vasculature

Retail Price $280.00
Today's Price Sale Price $238.00
Normal Price
Another magnificent item brought to you by Axis Scientific, this half head model is a great addition for medical classrooms and offices. Packed with 81 numbered anatomical features and paired with a...

Retail Price $188.00
Today's Price Sale Price $159.00
Normal Price
About the Axis Scientific Leg Model with Vasculature: Products like the Anatomy Lab Skeleton with vasculature are a great resource for anyone who is looking to learn more about the human vascular...

Retail Price $10,500.00
Today's Price Sale Price $9,650.00
Normal Price
This 3D model represents one of the largest and most complex in the series, consisting of a partial torso from the diaphragm to the proximal thigh with a complete abdominal cavity preserving varying...

3D Printed Vasculature of the Spleen

Retail Price $1,005.00
Today's Price Sale Price $915.00
Normal Price
At the splenic hilum, the splenic artery and vein can be seen entering the spleen to supply and drain the organ. The opening of the splenic vein has been kept patent by the insertion of silicon...

Retail Price $7,370.00
Today's Price Sale Price $6,700.00
Normal Price
Diaphragm and Xiphoid Process The diaphragm has been secured to the superior border of the dissected specimen with sutures to ensure an unobstructed view of the abdomen. The xiphoid process is in...

Retail Price $3,770.00
Today's Price Sale Price $3,425.00
Normal Price
This 3D model preserves a left pelvis divided at the midsagittal plane, and the proximal thigh to approximately the midthigh. In the midsagittal section, the urinary bladder, uterus and vagina, and...

Retail Price $2,560.00
Today's Price Sale Price $2,325.00
Normal Price
This 3D model provides a complimentary specimen to the H11 and H12 head and neck specimens by providing a perspective of the endocranial cavity without the brain, and a lateral dissection inclusive...

Retail Price $1,350.00
Today's Price Sale Price $1,225.00
Normal Price
This 3D model preserves the deep foregut organs: the descending, horizontal and ascending duodenum, the pancreas, and the spleen. A small window in the duodenum has been opened to allow for a view...

Retail Price $2,025.00
Today's Price Sale Price $1,840.00
Normal Price
This 3D model combines a midsagittal section of the head with preservation of brain and cranial cavity anatomy, with a unique deep dissection of the pharyngeal region via removal of basicranial bone...