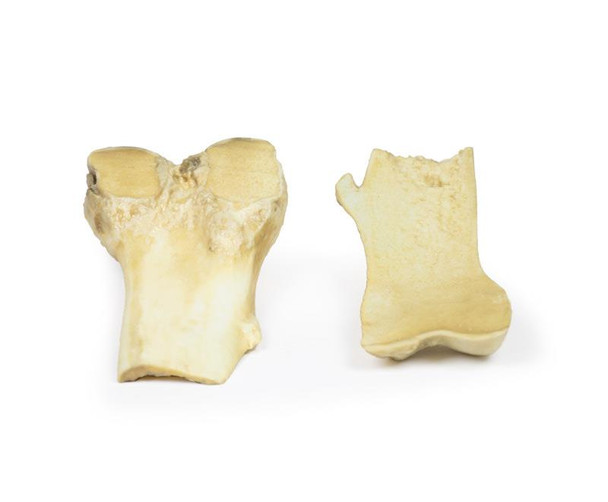 A 61-year old male with prostate cancer attends pre-assessment clinic prior to a prostatectomy. Overall, he feels well with no major complaints. On review of symptoms, it is noted he has chronic pain in his right knee, which his GP called osteoarthritis. To exclude boney metastases of the prostate carcinoma, a knee x-ray is ordered, which shows a pedunculated lesion projecting from the medial aspect of the diaphysis of the right femur. His prostatectomy goes ahead but he subsequently dies from a postoperative pulmonary embolism.

The specimen is the lower end of the patient's right femur, which has been cut in the coronal plane and mounted to display the external surfaces. A pedunculated bony protuberance 2 cm in length projects from the medial aspect of the femoral shaft 7 cm above the medial condyle. The projection is composed of normal bone with a thin cap of hyaline cartilage at the tip. This is an example of an osteochondroma.

An osteochondroma (or an exostosis) is a benign cartilaginous tumor. They are comprised of a cartilaginous capped bony protrusion from the external surface of the bone from which they arise. They are the most common benign bone tumors. Most osteochondromas occur spontaneously but they may also occur as part of multiple hereditary exostosis syndrome or post radiotherapy. They usually develop from or near the growth plate. They most commonly arise from the appendicular skeleton, especially in the lower limb around the knee or the upper limb at the proximal humerus. Men are more commonly affected than women.

Symptoms vary on the site and size of the growth. Many osteochondroma remain asymptomatic. Osteochondroma lead to symptoms from the compression of surrounding neurovascular structures. They may also cause a pain from myositis or a fracture of the bony spur. They usually present in the second decade of life. They can be diagnosed with plain x-ray but MRI is the gold standard to ensure that there is no malignancy present within the growth.

Hereditary exostoses are associated with mutations in the EXT1 and EXT2 genes. Reduced expression of these genes has also been seen in sporadic osteochondromas. Osteochondromas stop forming as fusion of the growth plate occurs. Treatment of excision is only if symptoms are severe. Malignant transformation to chondrosarcoma is rare in sporadic cases but more common in hereditary exostosis (5-20%).

Retail Price $640.25
Today's Price Sale Price $571.75
Normal Price
Clinical History The patient was an 80-year old man who suddenly lost consciousness. On examination there was a right gaze palsy, a left hemiplegia and right hemiparesis. Pathology The specimens are...

Retail Price $1,034.50
Today's Price Sale Price $923.75
Normal Price
Clinical History There is no clinical history for this specimen. Pathology The specimen is a parasagittal section of the right lung and the boundaries between the three lobes are visible. The entire...

Retail Price $479.75
Today's Price Sale Price $428.50
Normal Price
Clinical History A 38-year old female presents with severe nausea, vomiting, fevers and rigors. She has a history of recurrent urinary tract infection over the past 6 months. She has required several...

Retail Price $248.00
Today's Price Sale Price $221.25
Normal Price
Clinical History A 40-year old male presents with shortness of breath and swelling of his lower limbs. He is a smoker with a history of diabetes and previous myocardial infarctions. On examination...

Retail Price $622.50
Today's Price Sale Price $555.75
Normal Price
Clinical History A man aged 82 years had a history of tuberculosis of the left knee in childhood. He developed a painful swollen knee 10 days prior to admission to hospital. Examination revealed an...

Retail Price $604.75
Today's Price Sale Price $539.75
Normal Price
Clinical History A 65-year old male with presents with pain in his left groin. He has a history of skin melanoma on his left foot treated with surgical resection and radiotherapy. On examination, he...

Retail Price $588.50
Today's Price Sale Price $525.50
Normal Price
Clinical History A 57-year old male attends complaining of recurrent pain in his right thigh. On examination there is no palpable abnormality in the thigh. An x-ray of the limb showed bony absorption...